Police must secure an appropriate adult whenever they arrest, or voluntarily interview, a person who they "have a reason to suspect may be a vulnerable person" (as defined by PACE Code C).

Across the country, police forces are increasingly developing and supporting card-based identification schemes. These cards can be helpful in assisting police to identify mental vulnerabilities. They are all voluntary.

Click on a card name below for more information. If you know of a scheme that's not listed, please tell us about it.

The Pegasus system was developed by Chris Channon MBE, a former paralympian who has cerebral palsy. It is aimed at those whose disability or illness makes it difficult for them to communicate when calling or speaking face to face. It’s designed to make it easier to contact the police quickly and easily. It’s a secure database which contains details registered by an individual. They only have to say ‘Pegasus’ and give their pin number or show their Pegasus card to an officer. The Pegasus scheme is currently arranged at a local level. the card image above is from Sussex police and may look different in other areas.

How to get the card: Click on your police force to find out how to apply; Nottinghamshire, City of London. Dyfed Powys, Lincolnshire, Surrey, Sussex.

Lancashire Constabulary have developed an emergency information card, which aims to assist people with disabilities to communicate with police or other emergency services. It is credit card sized and has space for the person’s name and photo, medical condition, details of an emergency contact person, and other useful information such as communication needs or requirements in an emergency. The E Card is free of charge and distributed via various channels including NHS mental health teams. It was funded in partnership with Lancashire County Council, Physical Disabilty and Sensory Impairment (PDSI) and Lancashire Partnership Against Crime. the card was launched in 2007, has been identified as best practice by MIND and received recognition from in the media.

How to get the E-card

Mencap Cymru, Learning Disability Services and South Wales Police have jointly developed the scheme for anyone in the South Wales force area with a Learning disability or mental health and communication need.

How to get the Keep Safe Cymru card

There are a wide variety of Autism Alert Cards in use. As initiatives are local, designs vary widely between areas.

How to get the London autism alert card and passport.

The Autism Alert Card is free, plastic and credit card sized It can be issued to individuals aged 10 or over who live anywhere in Devon and Cornwall, although similar schemes are in place in other areas of the country and so the card may be recognised elsewhere.

How to get the Devon and Cornwall Autism Alert card 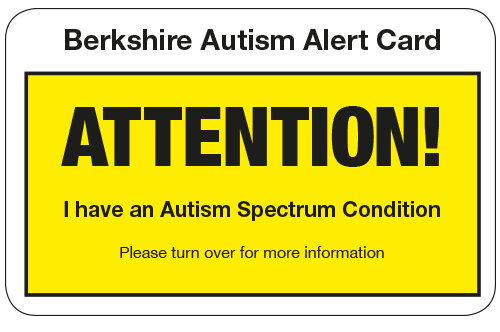 How to get the Berkshire Autism Alert card

How to get the Kent Autistic Trust Autism Alert card

How to get the Hampshire Autism Alert card (a smartphone app is also available).

How to get the Wiltshire Autism Alert card

How to get the Autism Anglia Autism Alert card

Autism West Midlands have developed the Attention Card in partnership with police services across the West Midlands. It has space on the reverse to include the contact details of a trusted person. In stressful situations professionals are able to contact this person.

How to get the Autism Attention card

The Brain Injury Identity Card is currently being developed by leading brain injury charity Headway. It is designed to help identify a brain injury and ensure that the survivor receives an appropriate response. The card also displays a 24 hour criminal legal assistance helpline number, should a brain injury survivor require legal advice.

For more information about the Brain Injury Identity Card, email This email address is being protected from spambots. You need JavaScript enabled to view it..

You have declined cookies. This decision can be reversed.

You have allowed cookies to be placed on your computer. This decision can be reversed.